In 1991, Chris Jaffe called together a group of acoustical consultants including Jaffe Holden Scarbrough, Artec, Kirkegaard Associates, Acentech, KMK Acoustics, Cavanaugh Tocci Associates, Inc. and Beranek, to form the Concert Hall Research Group. They agreed to pool funds to support research and measurements in the interest of advancing the understanding of acoustics in concert halls. 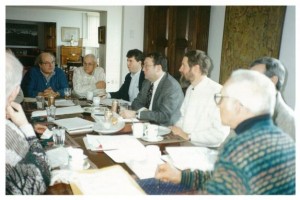 The initial measurement project during the summer of 1992 sent three different research teams to measure ten significant North American concert halls. Travel expenses were paid by CHRG, funded by contributions from the acoustical consulting firms. The three teams were led by Anders Gade (University of Denmark); John Bradley (National Research Council of Canada); and Gary Siebein (University of Florida). The resulting data was the basis of many papers presented at ASA meetings and several published in JASA.

The halls that were measured during the tour included:

Following the initial ten halls, several additional halls were measured by Bradley and Campbell in 1993-96:

The Mission of the Concert Hall Research Group is to advance knowledge and understanding of acoustic design for music performance spaces, with an emphasis on larger spaces such as symphony halls and opera houses.