The second summer institute on concert hall acoustics was held August 11-14, 2003 at the historic Gideon Putnam Hotel in Saratoga Springs, New York. The institute was sponsored by the Concert Hall Research Group (CHRG), with the cooperation of the Acoustical Society of America (ASA), the Technical Committee on Architectural Acoustics (TCAA), and the National Council of Acoustical Consultants (NCAC). The four-day conference was organized by Chris Jaffe, Robin Glosemeyer, and Clare Hurtgen, following the successful model of the first institute led by Bill Cavanaugh and Tim Foulkes at the Tanglewood Music Center in 1999. The second summer institute built upon the theme of current research in concert hall acoustics, based on the dialogue begun four years ago at the first institute, by concentrating on the application of this knowledge to create successful concert and multi-use halls. 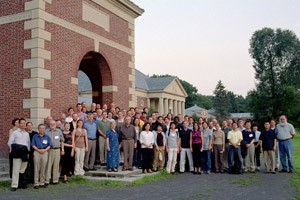 CHRG Participants in front of the Hall of Springs in Saratoga Spa State Park.

The 74 participants included 14 faculty members, 38 professionals, and 22 undergraduate and graduate students, representing 28 consulting firms and 11 universities from Australia, Canada, Chile, Japan, Korea, and the United States. CHRG awarded full scholarships including tuition, room and board, and travel grants to 18 students, and partial scholarships for tuition to 4 additional students. The program featured 7 technical sessions, in addition to an open rehearsal and concert of The Philadelphia Orchestra at the Saratoga Performing Arts Center (SPAC), over the course of 4 days.

During the first session on Monday evening, “Current Research of Architectural Acoustics Programs,” Rendell Torres and Lily Wang described the theses of many former and current graduate students. The program continued on Tuesday with two parallel sessions involving collaborative design professionals. Two acoustics or audio consultants, a theatre consultant, and an architect gave individual presentations and then answered questions in a roundtable format. The morning session, “Integration of Physical Acoustics with Architecture and Theatre Design,” featured Larry Kirkegaard and Ron McKay, theatre consultant Josh Dachs, and architect Malcolm Holzman, and the afternoon session, “Integration of Electro Acoustics with Architecture and Theatre Design,” featured Bob Coffeen and David Robb, theatre consultant Bob Wolff, and architect Scott Wilson. Tuesday evening brought a surprise demonstration of the prototype for the Concert Companion, a handheld device with scrolling program notes, which debuted on the East Coast at SPAC on August 20, 2003. The day concluded with presentations on “Concert Stage Acoustics” by Chris Jaffe, Larry Kirkegaard, and Ron McKay. 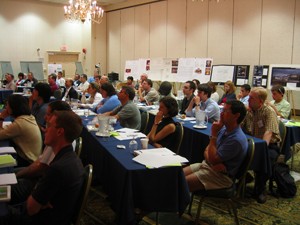 “Integration of Physical Acoustics with Architecture and Theatre Design” session.

Wednesday’s schedule offered a break from the traditional routine of sitting in a hotel banquet room. In the morning, participants attended an open rehearsal of The Philadelphia Orchestra conducted by Charles Dutoit at the Saratoga Performing Arts Center. Completed in 1966, SPAC was designed by architect Arnold Vollmer and acoustician Paul Veneklasen, and is one of the few outdoor pavilions in the United States with a balcony. Participants were free to move about the pavilion and listen from a variety of seats on both levels. (Many discovered that a nearby stream elevates the ambient noise in the pavilion, much in the same manner as an HVAC system elevates the ambient noise in an indoor venue.) The afternoon continued with a frank discussion of the current state of the performing arts industry and a backstage tour of the pavilion led by Herb Chesbrough, President and Executive Director of SPAC, and Joe Kluger, President of The Philadelphia Orchestra. Later in the afternoon, Yasushi Shimizu gave a presentation titled “Acoustic Enhancement Techniques,” followed by a demonstration of Yamaha’s new AFC system. That evening, the program of The Philadelphia Orchestra concert included “Overture to Ruslan and Lyudmila” by Glinka, “Cello Concerto No. 1” by Shostakovich featuring soloist Boris Pergamenchikov, and “Symphony No. 6 ‘Pathétique’” by Tchiakovsky.

The technical sessions concluded on Thursday morning with the pertinent topic “Can an Outdoor Pavilion Provide a Satisfactory Musical Experience?” led by Leo Beranek (in absentia), Chris Jaffe, and Carl Rosenberg. Fortunately, the institute concluded uneventfully only hours before the infamous blackout that affected the majority of the northeastern states. Participants enjoyed the beautiful weather, the idyllic setting, and the horse races almost as much as the technical sessions, classical music, and camaraderie of fellow acousticians. 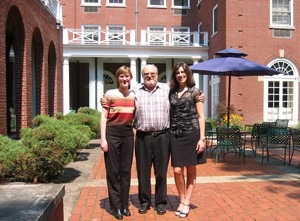